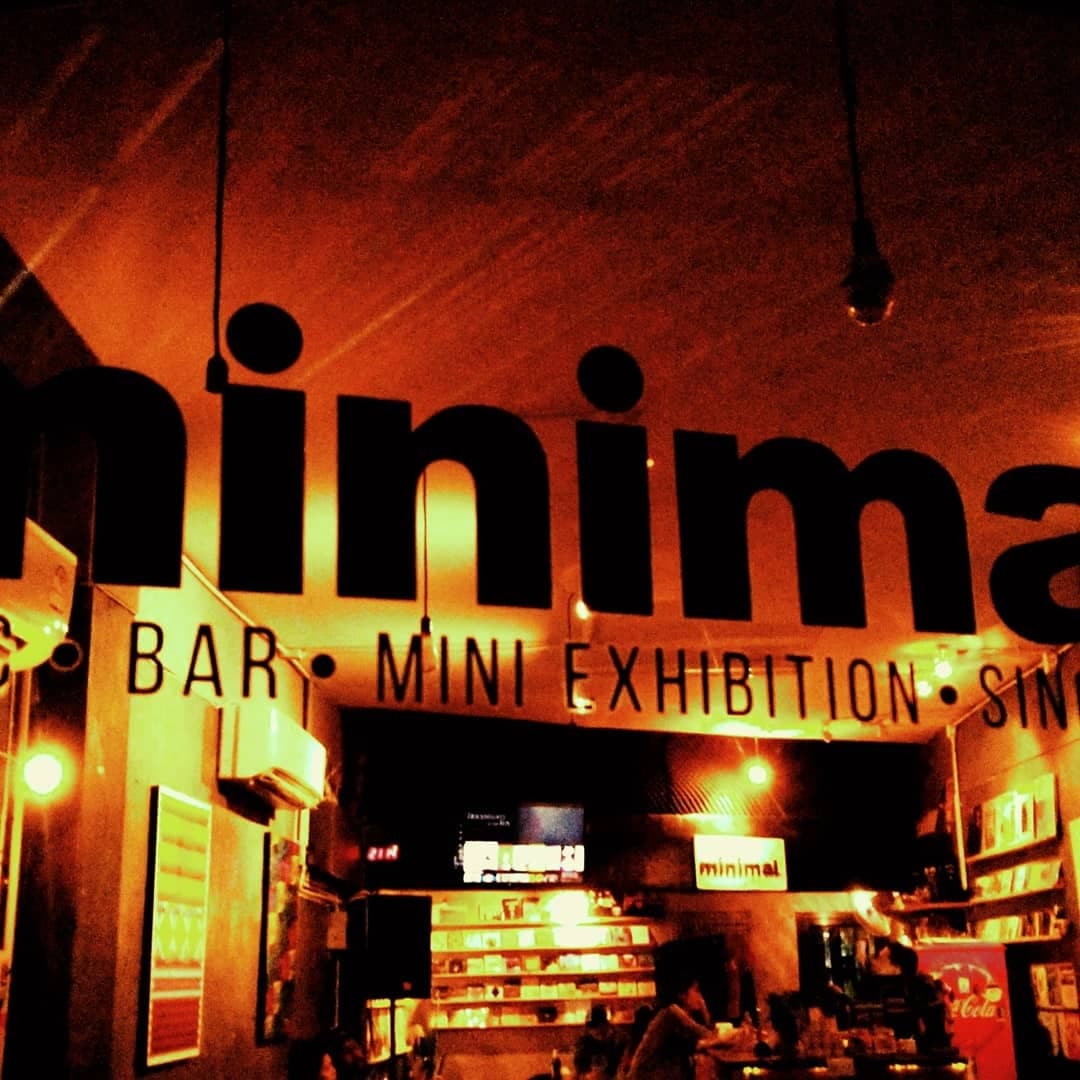 Out of the old town of Chiang Mai, club located in Santitham Area..Minimal Bar

The owner also owns the major independent label in Chiang Mai “Minimal Record” and this club is one of the places where hardcore fans gather.
We had an interview with Mr. Sumet Yordkaew, the owner of Minimal Bar & Minimal Record.

-When did you open Minimal Bar? Was it in Nimman (Fancy area like Daikanyama in Japan) when it’s opened?

I’ve opened this bar 12 years ago. Yes, the bar was located in Nimman at the beginning and it’s been 2 years since we moved to Santitham area.

‐When did you establish the label “ Minimal Record”?

It’s established in 2012. When the bar was in Nimman, the office was on the second floor, but now, the office is in 200 meters from this bar.

-Why did you moved to Santiam?

The rent in Nimman got too high and new law came into force, such as we cannot sell any alcohol within 300 meters from schools. That’s why, we decided to move to this place.

‐Did the customers change compare to the previous?

Yes, the customers were completely changed.

-But, are there same Minimal fans in Nimmanhaemin who still come to Santitham ?

Yes, hardcore fans has been coming for a long time, but mostly changed in 2 ~ 3 years.

-When I came to Minimal Bar before, there’re many customers who come here alone, are there many people who comes here by their selves?

It’s normal to be with friends for Thai people and it’s rare to see the people who go out by their selves for dinner and drinks. But there’re many customers who come alone here. It’s a small place and you can relax even you’re alone. Both boys and girls come here by their selves. Look, here’s a person who loves to come here alone. (Mr. Sumet talked to the regular customer behind us and he smiled.)

When we had gig, the guests often become friends. We ask shared seat when it gets crowded and they naturally become friends on the same tables.

-Then, are there the people who fell in love in the past?

Yes, there are! Lol

－How many bands belong to Minimal Record at this moment?

-How do you discover the bands?

We regularly create Mixed Album Compilation, and then we ask new bands around Chiang Mai to provide 2 songs. And if we found the band which was so attracted at a new album release event, we ask them to release an individual CD from Minimal Record.

-This place is close from Chiang Mai University, are there many bands made up of the students?

– As a music label, any specific sounds do you focus on?

There are no specific genres. Although I accept any kinds of music, the bands are quite similar.

-How many CD do you press? And where?

-Do the bands on your label have a gig in Bangkok?

-Are there independent music in Isan?

There’re only few bands from Isan, but Minimal Record fans are increasing from last year so there’re many fans when we have gigs in Isan.

-Records of Maria Takeuchi are displayed in this bar. I met the girl here who covers her songs, why is she so popular?

Its city pop, the song “Plastic Love” was popular in Thailand. I thought that the collector may purchase these records and bought these in Bangkok. To be honest, I don’t want to sell them so I put them high prices on. Lol

-There is a record of Penguin Villa, isn’t there? (Legendary independent band in Thailand) I’ve asked the bar staff that I want to buy this record before, he said to me that it’s not for sale. Lol

I don’t sell that. That’s just for display. Lol

-Do you sell other CD? Which label do you sale?

I sell CDs from the label in Bangkok and other regions. But mostly from Minimal Record. This place is a bar, not CD shop, so they are limited.

– Are there any CD shops where sell independent music in Chiang Mai?

There is one bar where sells CDs, but there’s no CD shops where sell independent music in Chiang Mai. Most of fans purchase by website.

What? I can’t pay for air tickets!

-No, no, no! Lol
When Japanese artists come to Chiang Mai for sightseeing and if they ask you that they want to play here?

Oh! Lol
Yes, yes! Love to have them in that case! Folk, Ambient, Japanese, English, independent and independent rock music….. As Japanese, Mitsukaze came here before. Japanese artist in Bangkok “Kota” will come to play in March.

-If there’s a band who wants to play at Minimal Bar, is it better to contact the bar?

Yes, please send a message by Facebook. If the sounds are OK for here, we welcome you anytime.

Solitude is Bliss, YONLAP and VELS.

-You are a teacher of Chiang Mai University. What do you teach?

-What!? The students who studied with you, do they work in an animation field after graduation?

Yes, they create animation and movies.

– Then, please tell me your favorite animation.

-Do you have a goal of this bar and label?

This bar is OK as it is, I want keep this place like this. As for the label, I want make it bigger. I don’t like big bar and crowded place, so I prefer to keep this bar with this size. I can’t make money, though… Lol